skip to main | skip to sidebar

By using the game Etoys on the operating system sugar I made my own race track with four cars, The cars could move foward and turn on there own, the cars would also stay in t 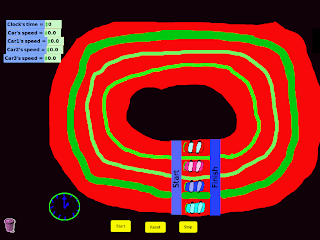 here own lanes. In the top right of the screen shot show the cars speed and how long they have been racing for. The buttons on the bottom are to make the cars start, to reset the cars and put them back at the start and to stop them racing. When one car gets right round the track at touches the finish line all the cars stop and the time stops.
The second and third screen shot shows the scripts i used for all the cars and the scripts i used for the 3 buttons. The cars script consist of how fast the cars go, it is set to random from 1 to 11, next in the script it tells, if this car touches the finish line it and the other three cars will stop where they are, and this stops the clock ticking. The bottom two in the script tells the car to stay in its lane, When the front of the car touches the line on either side of its lane it turns towards the centre of there respective lanes. 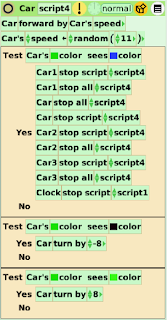 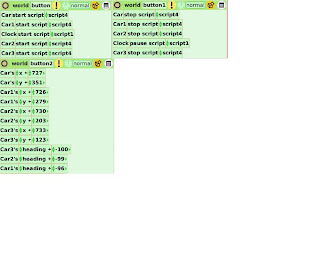